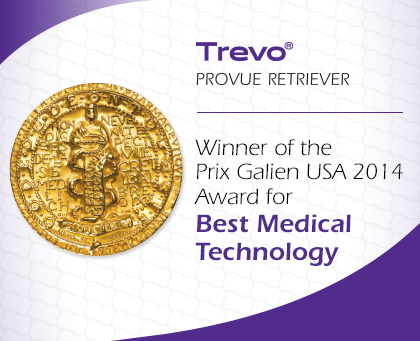 Stryker Corporation's Trevo® ProVue Retriever has received the Prix Galien USA2014 Award for Best Medical Technology. The Trevo ProVue Retriever is designed to restore blood ﬂow in the neurovasculature by removing blood clot in patients experiencing ischemic stroke. The Trevo ProVue Retriever is the first and only Stentriever® Device fully visible under fluoroscopic imaging, and sets a new standard in precision placement, visualization of the device/clot interaction and clot retrieval. This enhanced level of visibility provides physicians with real-time information not previously available.

As part of its ongoing mission to recognize the technical, scientific and clinical research skills necessary to develop innovative medicines, the Prix Galien USA committee on October 28 honored excellence in scientific innovation that improves the state of human health at its eight annual Prix Galien Awards Gala, held at the American Museum of Natural History in New York City.

"We are thrilled to be recognized by the Galien Foundation and honored to be among such a prestigious group of recipients of this year's award," said Mark Paul, President, Global Neurovascular, Stryker. "We strive to introduce innovative medical technologies that can help improve patient outcomes. The Trevo ProVue Retriever represents a truly innovative medical product and one that has brought about a new era in ischemic stroke management and intracranial clot retrieval."

In the United States, there are an estimated 795,000 strokes every year. Of these, approximately 35-40% are considered "large vessel" ischemic strokes, resulting from a blood clot in one of the major arteries in the brain. If left untreated, patient prognosis with this type of stroke is very poor, with mortality rates as high as 86%. The frontline medical therapy for ischemic stroke is a clot-busting drug (IV tPA) that is administered intravenously. Studies have shown that IV tPA has only a 6-44% success rate in dissolving the clot in an intracranial large vessel occlusion. For patients ineligible to receive IV tPA, or where IV tPA has been unsuccessful, the Trevo ProVue Retriever offers a minimally-invasive surgical option for removing the clot. The landmark TREVO 2 Trial, a prospective, randomized trial, has shown revascularization rates of up to 92%. High revascularization rates and ease of use have resulted in rapid adoption of the Trevo ProVue Retriever. With an expanded physician use base, hospitals around the world are now increasingly able to offer this proven medical treatment for ischemic stroke.

The Trevo ProVue Retriever was granted 510(k) market clearance by the U.S. Food and Drug Administration in October 2012.

About the Galien Foundation

The Galien Foundation fosters, recognizes and rewards excellence in scientific innovation to improve the state of human health. Its vision is to be the catalyst for the development of the next generation of innovative treatment and technologies that will impact human health and save lives. The Foundation oversees and directs activities in the USA for the Prix Galien, an international award that recognizes outstanding achievements in improving the human condition through the development of innovative therapies. The Prix Galien was created in 1970 in honor of Galen, the father of medical science and modern pharmacology. Worldwide, the Prix Galien is regarded as the equivalent of the Nobel Prize in biopharmaceutical research.