Study Published In The New England Journal Of Medicine Finds…. 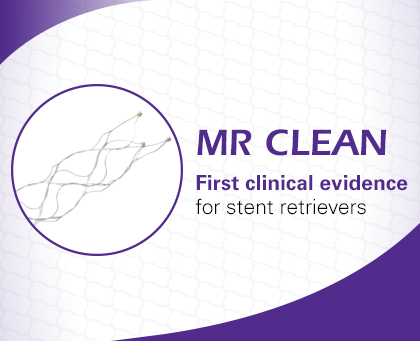 Study results released today in The New England Journal of Medicine gave the world of stroke care more evidence that physicians are winning the battle against this debilitating disease, which affects as many as one in six people.

The trial investigators found that using intra-arterial treatment to remove a stroke-causing blood clot in a large vessel supplying blood to the brain provides better outcomes than trying to dissolve the clot using a clot-busting drug (lytic) alone. One of the devices used in the trial was Stryker’s Trevo® Retriever.

“This is a highly significant milestone in the treatment for a subgroup of patients with a stroke caused by a large artery occlusion,” remarked Dr. István Szikora, President of ESMINT, the European Society of Minimally Invasive Neurological Therapy. Dr. Szikora believes the results of this trial will be impactful on a global scale and will “…change the practice of acute stroke treatment in this special group of patients.” He added, alluding to the fact that the battle against stroke care is still not won, that his fellow physicians “must make sure that this delicate technique is being used in proper conditions and delivered by properly trained physicians.”

The MR CLEAN trial (Multicenter Randomised Clinical trial of Endovascular treatment for Acute ischemic stroke in the Netherlands) was a prospective, randomized, multi-center trial that compared the effect of intra-arterial treatment with standard treatment for medical care, which could include the lytic IV tPA if indicated. This clot-busting drug was administered through an intravenous injection – the current standard of care for these patients. Intra-arterial treatment could consist of IA lytics or mechanical treatment, however in the majority of the patients in the trial a stent retriever was used. In this procedure, the stent retriever is inserted into the patient’s femoral artery starting in the leg and navigated to the site of the blood clot in the brain – once in place, the physician grabs the clot with the device and removes it.

Use of retrievable stents (sometimes called embolectomy) has been studied in clinical trials for years. "In earlier trials we showed that embolectomy devices can open brain vessels during acute stroke,” remarked Wade Smith, MD, PhD a Professor of Neurology at The University of California, San Francisco. “We later proved that the Trevo device was a substantial improvement,” he continued, referring to the clinical evidence that new devices such as the Trevo® Retriever are superior to older generation embolectomy devices.

The results show that, in the control arm of the study, the current standard treatment results in good outcomes only 19 percent of the time as characterized by a Modified Rankin Score of 0-2. The treatment arm, using the newest generation of stent retrievers in conjunction with clot busting drugs, was almost twice as likely to result in a good outcome. While these results only apply to the subset of stroke patients who could be treated within six hours of onset and had a blood clot in the forward-most (anterior) arteries of their brain, that population accounts for a large number of stroke victims. As many as 125,000 patients in the US and 90,000 in Europe arrive at the hospital with this type of stroke annually.

Dr. Smith is encouraged by the impact this news will have on his patients. “We now have proof that these treatments improve patient outcomes. This is remarkable for a disease that can kill up to 40% of patients left untreated.”

“The Trevo ProVue Retriever is designed to allow physicians to visualize blood clot interaction – the only such device on the market,” said Mark Paul, President of Stryker Neurovascular. “It is our latest development in our commitment to providing the best tools for physicians treating stroke.

“We recently received validation of our tireless efforts in the form of the prestigious Prix Galien award for Best Medical Technology in 2014 and today’s publication adds even more fuel to the fire. Our focus on innovation and our continued promise to Complete Stroke Care is paying off – we are one step closer to winning the battle against stroke and we are incredibly proud that the Trevo Retriever is playing an instrumental role.”

An animation of Stryker’s Trevo® Retriever is available here: http://www.trevoprovuevideo.com

For more information on how to detect a stroke and how to get help, please download our patient information booklet here: www.trevopatientinfo.com

About Stryker:
Stryker is one of the world’s leading medical technology companies and together with our customers, we are driven to make healthcare better. The Company offers a diverse array of innovative medical technologies, including reconstructive, medical and surgical, and neurotechnology and spine products to help people lead more active and more satisfying lives. Stryker products and services are available in over 100 countries around the world. Please contact us for more information at www.stryker.com.